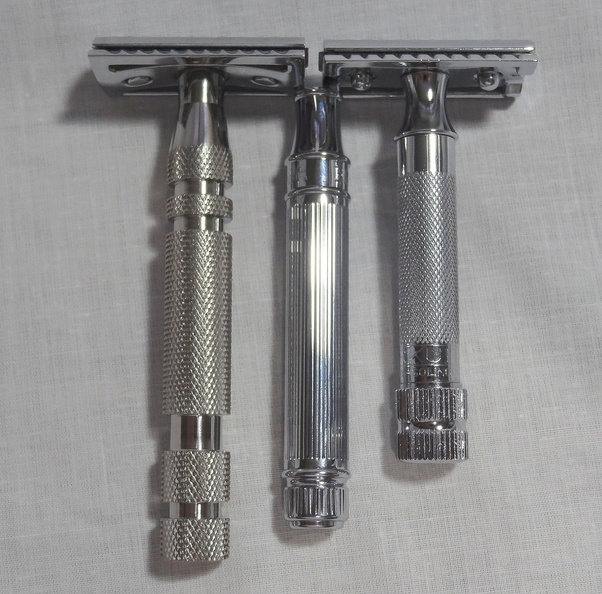 Probably two of the most popular and talked about safety razors today. I was a bit confused in the beginning when I needed to choose between them, but now that I have used both I can summarise the key differences. Both are excellent razors, especially for beginners, but the key differences will be of interest to many people:

Merkur 34C
Pros:
- Does have a lightly knurled handle which is perfectly good to use with wet or soapy hands.
- Has a slightly shorter handle which gives good control but if you have large hands this could be a problem.
- It is a two piece razor which is slightly easier to open and change blades.
- The head is slightly wider so the blade does not protrude as much as with the Edwin Jagger, which means trimming under the nose is very easy.
- It is very mild on the aggressiveness scale and you can in fact press harder without causing razor burn, which means it can also be used elsewhere and not just the face.
- It is more available to purchase than the Edwin Jagger.
Cons:
- You can't change the handle as it is integrated with the head.

Edwin Jagger DE89
Pros:
- Slightly more aggressive cut which means a slightly closer shave, so don't press harder with this razor (still relatively mild though).
- You can change the handle and pictured above is the iKon OSS handle I fitted which gives it far better grip than even the Merkur 34C. The handle in the middle is the original Edwin Jagger handle.
- It's chrome finish is second to none, really beautiful, and all the parts are well chromed including the bits you don't see.
Cons:
- Need to be careful under the nose as the blade protrudes slightly (using Feather blades).
- The three pieces are a bit more difficult to handle when changing blades.
- That default handle is a bit slippery (I never dropped it but it did not feel comfortable - I think they do make a newer handle now that has knurling on it). But this is not a major issue as you have a choice of 3rd party handles that you can fit.
- Certainly in South Africa I could not source the Edwin Jagger locally at all.

In summary though a complete novice can't go wrong with the Merkur 34C and it is a good way to start out. I still prefer the cut of the Edwin Jagger and now that I have a really excellent handle on it, it is probably the razor that I'll use as my primary razor.

You can also check out my Traditional Shaving YouTube playlist at www.youtube.com/playlist?list=PLdSTEdM8Pkf0hDL-iV9dQFWjZr... which shows reviews on both these razors, as well as many other excellent tutorial videos that I have found useful.